One of the most renowned scientific achievements of the Astrophysical Observatory Potsdam was the introduction, encouraged by the first Director, H.C. Vogel, of the photographic plate for the determination of radial velocities of stars. Observations in those days were carried out with a 30-cm refractor, which rather limited the application to bright stars; in order to include fainter stars in this prestigious programme, more powerful telescopes were required.

The idea to construct what in those days was considered to be a huge astronomical telescope had already been discussed shortly after the founding of the Observatory in 1874. In 1889 a double refractor, with apertures of 32.5 and 23.5 cm and a focal length of 3.4 m, had just been mounted in the Photokuppel to the west of the main Observatory building; it was used mainly for cartography of northern-hemisphere stars as part of the Observatory’s contribution towards the Carte du Ciel which had been planned by the Paris congress of astronomers in 1887. Although this instrument was very practical and successful for taking photographic records of star fields, it was to small to take over the spectroscopic observation of radial velocities.

Plans for a new and bigger double refractor had been proposed by Vogel in 1890. The preference for a refractor rather than a reflector was due to the relatively primitive technology of the latter at the time, whereas the necessary technical experiments with big lenses could be carried out in the Observatory’s own laboratories. The dimensions of the lenses were carefully calculated according to the laboratory tests of the properties of different kinds of glass.

The large telescope, called the Great Refractor was completed just before the turn of the century, and was inaugurated in the presence of Emperor Wilhelm II on August 26, 1899. 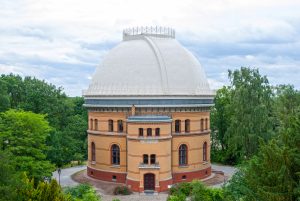 The buildings of the Observatory, founded 25 years previously, already comprised a main building with three domes, the Photo-dome, a Director’s private house, three houses for observers, and a machine shop. The dome of the Great Refractor was added in a manner that preserved the harmony and uniform style of the architecture originally created by the Court Councillor P. Spieker. The whole ensemble, including the dome of the Great Refractor, are now officially protected monuments. The erection of the building for the Great Refractor was accompanied by that of two more houses, (i) the Beamtenwohnhaus for the castle warden, the telescope mechanic and other auxiliary staff and guests of the Observatory, and (ii) the engine house for a gas-driven generator.

The mechanical parts of the telescope, in particular the German mounting, were constructed in Hamburg by Repsold & Söhne and installed in a dome with an inner diameter of 21 m and a height of 18 m. The moving parts of the telescope weighed 7 tons. The dome, whose total weight was 200 tons, was manufactured by Bretschneider & Krügner in Berlin-Pankow. The moving mechanism of the dome and the observer’s lift, which is technically unique, were made in Berlin by Hoppe. The electrical equipment, including the driving motors, was carried out by Siemens & Halske in Berlin.

The Great Refractor has two objectives:

Both objectives are doublets of crown and flint glass, and were made by the optics firm Steinheil (München). The blocks of raw optical glass were supplied by Schott (Jena).

With its diameter of 80 cm for the larger objective, the Great Refractor is the world’s fourth largest, whereas its colour correction optimized for photographic plates is unique. The tube of the 50 cm objective, fixed parallel to that of the main tube and corrected for the visual colour range, was initially used as a guiding telescope. The two objectives possess different qualities:

When the 80 cm lens was first brought into service, its condition required the invention of methods for testing astronomical optics. Several methods of them, such as the Hartmann test, are still in use today. The astronomical observations concentrated especially on spectroscopy of close binaries. From these observations the existence of interstellar matter could be inferred. Unfortunately, the efficiency of the spectroscopic observations made with that telescope was affected by the length of the tube and by the limited size and weight of the spectrograph which the telescope could carry. However, for observations of visual double stars the long focal length of the telescope proved to be an asset, thus making it particularly suitable for the absolute determination of stellar masses.

In 1968 the scientific profile of the institute has been changed and the observations have been stopped.

Thanks to the generous support of the Pietschker-Neese foundation, watched by the Deutschen Stiftung Denkmalschutz, the Deutschen Stiftung Denkmalschutz itself, the Astrophysikalischen Institut Potsdam, the Förderverein Großer Refraktor Potsdam e.V., and many further private donors extensive restoration works have been carried out from 2003 to 2006. After the dismantling of the instrument and its transfer to Jena the factory 4H-Jena-Engineering restored the most parts to the state when the instrument started in active astronomical use. At the same time the inner hull of the dome, its moving mechanism, and the observer’s lift have been renewed. After the end of the restoration works the opening ceremony of the whole ensemble taken place on May 31, 2006. As a highlight of old astronomical observational technique the Great Refraktor offers each of us the chance of learning about our scientific history and the astronomical neighbourhood.